MK – Canada’s Kosher Certifier is one of the largest kosher certification agencies in Canada and one of the top kosher certifiers in the world.  The distinct symbol is found on thousands of food products made by hundreds of manufacturers. Included in these products are major mainstream brands such as Coca-Cola and its newest product –

Canadians can now enjoy the great Coca-Cola taste with fifty per cent fewer calories than regular colas. Sweetened from natural sources – a blend of stevia extract and cane sugar – Coca-Cola Life joins other trademark brands: Coca-Cola, Diet Coke and Coca-Cola Zero. The new and distinctive green can with a leaf is hard to miss on the shelves.

If you used to be a coke drinker and left the brand due to the calorie count, you can now come back. Not only that, but you’ll be coming back with an added energy – l’chaim – as in l’chaim to life!

In 1886, Coca-Cola was invented by a pharmacist named John Pemberton, otherwise known as “Doc.” He invented many drugs, but none of them ever made any money. So, after a move to Atlanta, Pemberton decided to try his hand in the beverage market.

In his time, the soda fountain was rising in popularity as a social gathering spot. Temperance was keeping patrons out of bars, so making a soda-fountain drink just made sense. And this was when Coca-Cola was born.

Of the 57 billion servings of all kinds of beverages drank each day (other than water), just over 3% (1.9 billion) are drinks trademarked or licensed by Coca-Cola. It’s the most widely distributed product on the planet.

Coke makes so many different beverages that if you drank one per day, it would take you more than nine years to try them all. Coca-Cola has a product portfolio of more than 3,500 beverages (and 500 brands), including sodas, energy drinks, and soy-based drinks.

If every drop of Coke ever produced were placed in 8-ounce bottles and laid end-to-end, the bottles would reach the moon and back more than 2,000 times. Put another way, that would be one round​-trip a day for five years, seven months, and 14 days.

Coke owns 20 brands that each generate more than $1 billion in sales per year.

The Coca-Cola brand is worth an estimated $83.8 billion.

Together with this new product, it is interesting to note how Coca-Cola got to MK in the first place.  In 2016 Coca-Cola ranked first in the 100 most powerful brands worldwide which means they will not go to just any Kosher certifier.

Coca Cola works with Kosher certification bodies to certify some of its most popular products and package sizes. MK – Canada’s Kosher Certifier is one of their valued partners. Rabbis associated with the Jewish Community Council of Montreal visit the bottling plants a few times a year to conduct audits of all processes and to confirm that the beverages are compliant with the requirements of the certification. Products certified as Kosher by MK – Canada’s Kosher Certifier are marked by the MK symbol on the label.

Most people know that theformula for Coca-Cola is the best kept secret in the world. It has been this way for over 130 years and l’chaim to that!

Given that, to obtain a kosher certification, sufficient information must be made available to certifying organizations. You can rest easy that the information given was satisfactory to those responsible for authorizing the certifications.

So the next time you decide to get together with friends, make sure to say l’chaim with the real deal – Coca-Cola Life. 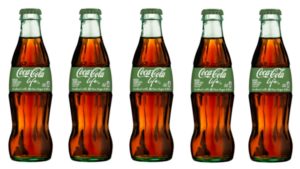