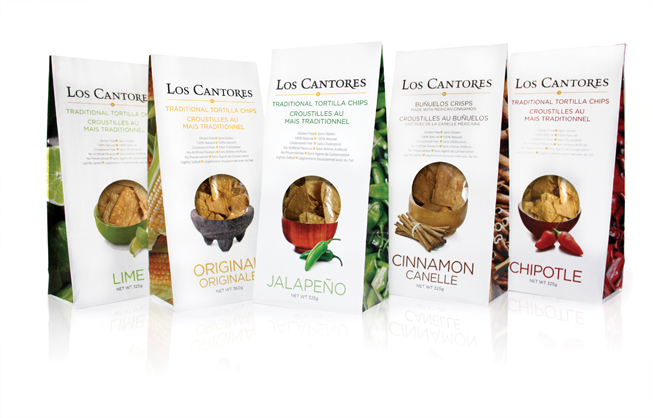 Who has not dipped a tortilla chip into a yummy bowl of guacamole? Delish. Ever wonder how they make those chips? Wonder no more.

You may think that to make a tortilla chip you need corn kernels. Not quite. Tortilla chips, as made by Los Cantores (Mexican Corn Products Inc) masters of all chips Mexican, start with corn flour which is very specific to corn chips.

The flour is mixed with water and Los Cantores private seasoning mix. Once the dough is mixed it is called masa and will fall into roller, that makes the chips into their shape.

The chips are then cut and pushed along a conveyer belt into a huge oven where they are baked. The next step is into a deep fryer, but because the chips are already baked, they fry them very rapidly.

The cooked chips are then gently dropped into a drum with a seasoning dispenser that slowly and gently turns and coats them. Believe it or not, the chips come out intact. A multi-head dispenser drops the chips, again very gently, into bags which are then sealed, boxed and shipped to stores.

Who is Los Cantores?
The company was started by Gabriela Godinez-Laverty, a beautiful woman who was born in Mexico. In 2001, she married a Canadian Army Officer and immigrated to Canada.

After taking a small course on Entrepreneurship at a local school, Gabriela discovered her passion for business. In April 2004, her and her husband founded Mexican Corn Products, Inc. By May, 2004 her father and brother joined her in Canada to help the start-up operation.

The rest, as they say, is history.

In March 2006, Gabriela knocked on the door of Farm boy, a chain of fresh market stores in Ontario. Together with her team, Gabriela developed a line of tortilla chips for the chain private label starting with: Original, Jalapeno and Chipotle.

Since then, Gabriela and her team have developed seven different flavours of tortilla chips. MCP (Mexican Corn Products) brand “Los Cantores” can be found at many of the independent grocers around Ontario and Quebec. In 2015, the “Los Cantores” brand was introduced to the US Markets through chains like Fresh Market.

At the specialty food show earlier this year, Gabriela met MK – Canada’s Kosher Certifier. It was a marriage made in heaven for both MK and Los Cantores as they were now able to enter the very lucrative kosher food industry.

Right now, Los Cantores tortilla chips can be found in Metro and IGA in Quebec. They are expanding their presence in other stores in the Montreal area. So, find a great guacamole or other dip recipe, grab a bag of Los Cantores chips and enjoy!