BEHIND THE LOGO – WHAT MAKES THE MK UNIQUE 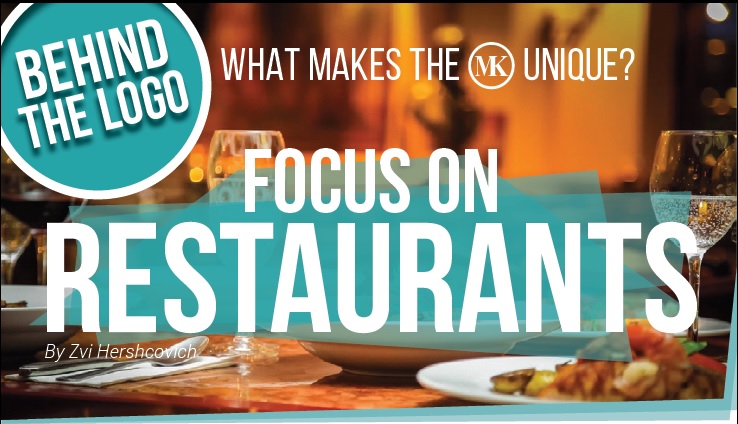 That’s what it was.

He was always an overthinker.

Now he was wondering if he could handle the responsibility.

It was Pesach, 2006. I was a spending the holiday in Morristown, New Jersey with my in-laws. Chatting with a friend in Shul, catching up.

We had both married within a month of each other. Now, we both worked the same job. I was a Mashgiach, a Kashrut supervisor for the MK at a Montreal caterer. He had just been hired by a Kashrut organization based in the United States to ensure that a kosher restaurant in the area that he lived maintained the organization’s high standards.

“You’re lucky,” he told me. “I’m paid by the owner of the restaurant. What do I do if I’m placed in a situation where I catch him doing something wrong? If I cause trouble for him, why would he want to pay me?”

It wasn’t the first time I had discovered the advantages of the MK, and it wouldn’t be the last.

All fridges are locked

One unique requirement for restaurants under the MK is their refrigerators must have locks installed on its doors. The Mashgiach and the MK office are the only ones with the code and the Mashgiach is required to open the refrigerators in the morning and lock up at night.

This ensures that the Mashgiach is the first one there in the morning and the last to leave.

Adopting a kosher symbol means taking on the responsibility of ensuring that all companies under the symbol adhere to the kosher laws. Sounds simple enough, but the reality is that the laws are complicated and questions always come up. Small certifying agencies are often unable to handle a large volume of potential issues that can arise in one day.

When it comes to supervision, the MK has developed a support system for each Mashgiach that comes from close to 100 years of experience.

Any restaurant bearing an MK symbol is equipped with a full time Mashgiach and a roving inspector. The roving inspectors travel around the city and pop in unannounced. They are the first person called if a Mashgiach needs help with anything. They serve as the Mashgiach’s teacher, advisor and friend (I owe a debt of gratitude to Rabbi Klein, who I still admire today).

Another level of support is an office to handle calls. I recall one incident where my roving inspector was busy dealing with a situation at another restaurant and the office sent another inspector to help me work out an on-site problem.

Finally, a group of Rabbinic experts are available to handle serious incidents and difficult questions which may arise.

This four-level support system ensures that any issue is immediately addressed and dealt with. It allows the MK to deal with high volume of calls, and ensure a higher number of visits. This makes for an unparalleled level of Kashrut supervision.

I was standing next to the walk-in fridge checking eggs for bloodspots when Rabbi Barkany entered, excitedly holding a box of red peppers. I watched him shake rain off his coat and wondered why my usual “roving rabbi” wasn’t here.

It was a few summers back when I first started working at the MK, when I experienced the first of numerous random visits from MKs experts. Rabbi Barkany set the box on the table and got excited when I told him, “thank you but we already have red peppers.”

Rabbi Barkany pulled a large magnifying glass from his pocket. “We’ve seen a temporary insect infestation in red peppers from certain countries,” he explained, peering at the bottom of one of the vegetables I’d given him. “Here, see for yourself.”

I looked. Skeptically. But the truth was in plain sight. The pepper was swarming with bugs.

The red pepper ban lasted a couple of months until the infestation was taken care of.

The rules of Telaim (infestation) are complicated and the MK has experts specializing in different areas of Kashrut who are always up to date with any news pertaining to their area of expertise. Thus, a Telaim expert will work with the Mashgiach and owner, training and checking to ensure there are no bugs in your food. Passover Kashering experts will travel from site to site training Mashgichim on the best methods for kosherization.

Where does your check come from?

The MK staffs a full office, and pay the Mashgichim directly. There are some organizations whose Mashgichim are paid by the restaurateur, caterer, butcher or baker. The one who owns the business he has been hired to watch.

The Mashgiach can be placed in a delicate position.

At the MK, each Mashgiach receives their paycheck from the MK offices. Their relationship with the owner is expected to be respectful and professional, and neither party worries about what may happen should a Kashrut issue appear.

When my Morristown friend discovered a spice in the back of his restaurant that didn’t have a kosher symbol, he was under tremendous pressure, fearing that reporting the incident may result in him getting fired.

I faced a similar situation while working as a Mashgiach for the MK and notified my roving inspector. He advised speaking directly to the owner. We discovered the error and the issue was quickly resolved without any stress on anyone.

This third party method of payment is another component of maintaining the highest level of Kashrut.

As a massive organization with a Vaad HaRabbanim that features eight different Rabbinic leaders from different segments of Montreal’s Jewish community, every Jew across the city is represented and their Kashrut needs are assured.

The vast majority of certifying agencies are associated with one community. The MK is unique in that it is one of the only agencies in the world where rabbis from all communities meet weekly to ensure the highest standards of Kashrut.

An additional advantage to having leading rabbinic figures meet is collaboration between local communities and between greater communities and their organizations across the globe.

The MK is on the Executive of the AKO (Association of Kashrus Organizations), the largest international Kashrut administration. We are connected with the primary certifying agencies in the world, local agencies in the city of Montreal, and many well respected Mehadrin agencies.

These collaborations result in instant knowledge of any kosher issues that may arise at any time. The MK is thus prepared for emergency Kashrut situations, ready to deal with food trends, and updated on the latest innovations.

When it comes to choosing a reliable kosher symbol, the MK has a five star reputation. One can be assured that the highest kosher standards are adhered to at all times and are proud to offer a seamless relationship, which has become the MK’s hallmark.