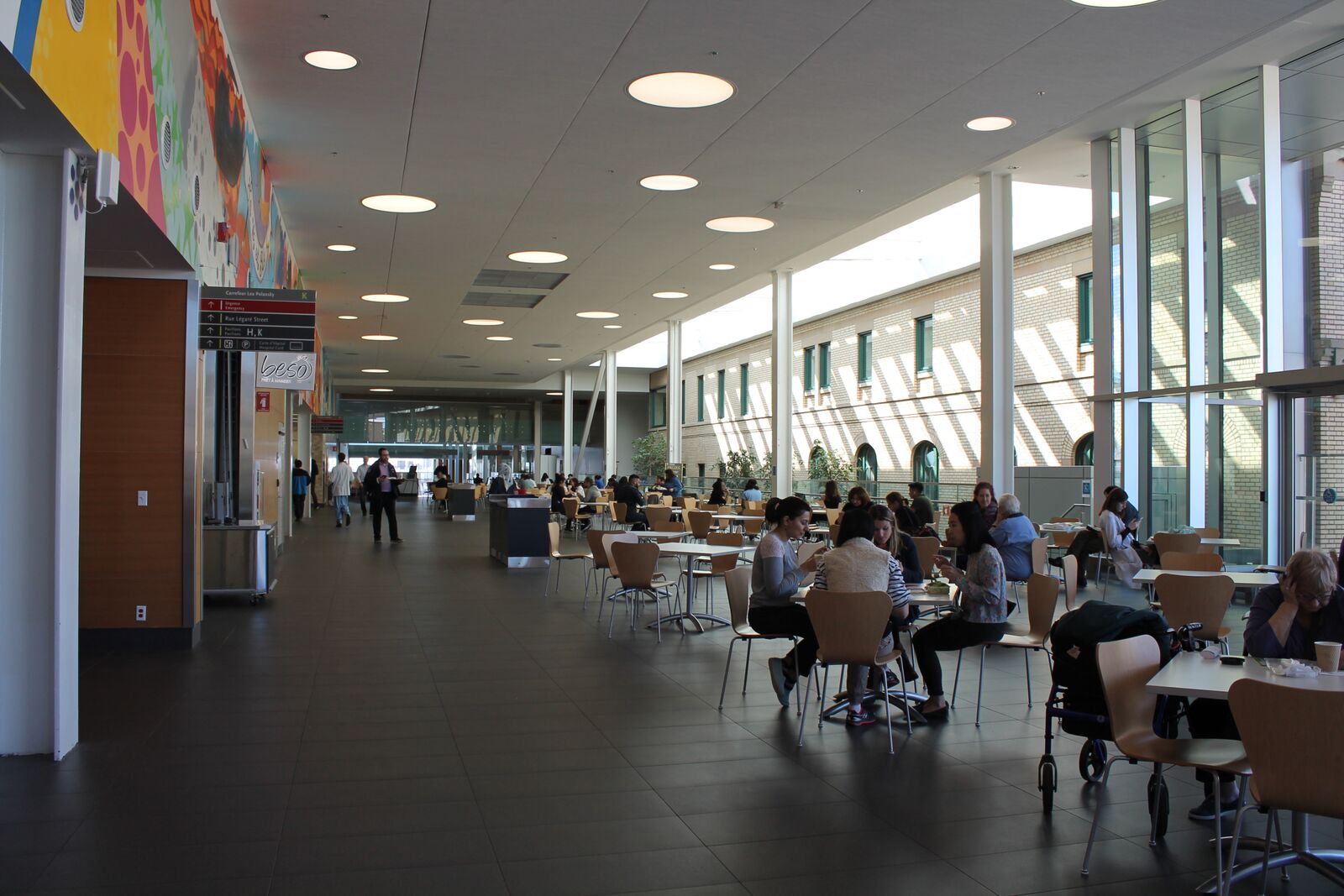 Bright, open, spacious, clean, natural sunlight, delicious food, warm ambiance… Guess where you are eating? If you said the food court in Pavilion K at the Jewish General Hospital you read the title. Otherwise you would never have figured it out – it’s that good.

After decades of serving staff, patients and visitors to the hospital, the cafeteria on the main floor closed in November 2016. There was no doubt that another venue had to be found to serve the hundreds of people who ate there daily.

Where is the Food Court?

Those familiar with the Jewish General Hospital will no doubt have visited Pavilion K, which houses the emergency, has a surgery department and other medical facilities. When you enter the building at the Legaré entrance there is a set of stairs facing you. After walking up the stairs you will see an escalator straight ahead of you. Take that escalator and lo and behold you will get off in the airy and beautiful food court, which has replaced the cafeteria.

Currently being built is a passageway (where the cafeteria used to be) that significantly cuts the distance between the main entrance and the Atrium.

Mrs. Lea Polansky obm, passed away in 2013. To honor her legacy and memory, the family were the gracious benefactors of the food court – Carrefour Lea Polansky –  in the new pavilion. After spending many hours in the hospital when their mother was ill, they had a vision of what this new eatery would reflect: It should be a place where people could gather and not feel like they were in a hospital. They succeeded beyond their wildest dreams.

If you decide to sit at the far end of the very large space, you will be under a long and wide window with natural light flowing into the room. It is interesting to note that the façade of a building formerly on that site was kept intact, which gives the entire space an outdoor feeling.

Under strict MK – Canada’s Kosher Certifier supervision, the food court is a business independent of the hospital. There are two mashgichim who, as is the norm of MK, are responsible for making sure the food that is under the strictest supervision. These men take their jobs very seriously and as such, the level of kashruth is as good as it gets.

There are five different kiosks in the food court serving about seven hundred and fifty people daily. Once the passageway has been completed, the next opening will be a sushi restaurant which will be located along the hallway toward the food court. What the kiosks have in common is that the food is made fresh daily and it is delicious. Where they differ is in what they serve. You name the food, it is available.

There is a head chef overseeing the menus and quality of food. Fresh ingredients and importance of presentation are hallmarks of the food court. Lines are not an issue as there are enough kiosks to accommodate even the busiest breakfast or lunch-hour.

The Kebab Shop serves up exactly that – kebabs, shwarma, falafel, salads and many other Israeli and Moroccan dishes.

Café Sofia is now a breakfast place but will shortly switch menus later in the day serving Italian food. You can get breakfast sandwiches, a sweet breakfast (pancakes, waffles or French toast) and delicious coffee.

Maison Ben’jing is the Chinese food kiosk. You can get anything from General Tao chicken to Sesame Beef, egg rolls, noodles dishes, soups and much more.

Beso Prêt-à-Manger has salads, ready to go sandwiches, yogurts, bagels, homemade bread, baked goods such as muffins, croissant and Danish, fresh fruit cups, lattes and cappuccino  or if you’re in a rush you can pick up their ‘grab and go’.

Fresh baked challah is available for take-out on Fridays as well as whole rotisserie chickens. They are planning to be partially open for Passover and close Fridays approximately two hours before Shabbat. Beso has ready-to-go sandwiches, salads and other items on Shabbat.

There is no doubt that when the cafeteria closed, a piece of history closed with it. Given that, The Carrefour Lea Polansky filled the void in a spectacular fashion, serving people who often need to be pampered, if only for one meal.