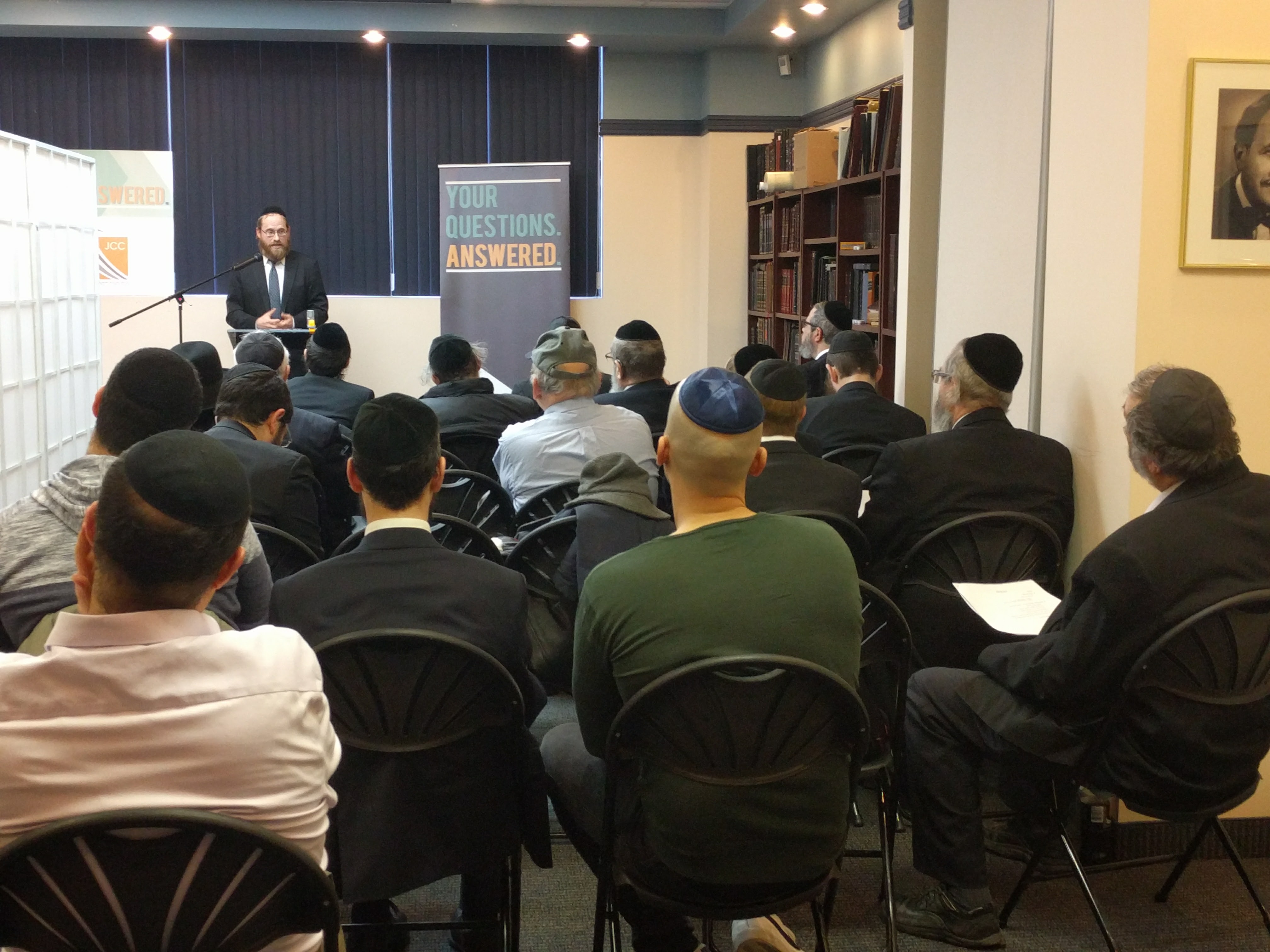 The creative minds at Canada’s Kosher Certifier coined this year’s theme #ezpassover, focusing on helping consumers across Canada keep Passover in a simple and Kosher way.

Although Passover comes along each year, except for the seders and Haggadah which don’t change, everything else is up for grabs. Many, many products, from food to medicine to lipstick fluctuate and change from year to year. Enter Canada’s Kosher Certifier and #ezpassover, the umbrella for this year’s Passover experience.

Pesach in a Nutshell was held on Sunday March 26th, exceeding all expectations in both the attendance and vast array of questions.  Montreal’s Chief Rabbi, Rabbi Binyomin Weiss, world-renowned for his expertise in medical issues responded to questions in his field, Rabbi Uri Deutsch explained the story of Passover, Rabbi Aryeh Posen dealt with halacha, Rabbi Berel Bell deftly negotiated non-medicinal products and Rabbi Yoel Chonon Wenger presided over the general ‘Ask The Rabbi Your Passover questions.

Canada’s Passover hotline was buzzing until hours before the onset of the holiday. Over 4,000 questions were fielded from across Canada with an inordinate amount of calls from Toronto and its environs. As Canada’s Passover Magazine is available online, it created an awareness of the MK’s hands-on service and calls were answered from across North America and other continents.

The Passover magazine was truly innovative and cutting-edge due to its new, user-friendly size and vastly expanded lists. It was gratifying to receive positive feedback from every corner of the country.

the standing triangle style allowed Seder participants to flip the pages and follow along the Seder in English or Hebrew. Together with the Eltes family, the JCC believes that keeping children engrossed in the Seder is one of the links to Jewish continuity and were proud to be a part of this endeavor.

Canada’s Passover App, with its thousands of downloads kept consumers in the loop in our ever-changing, fast paced world. The all new #urpesachanswers responded to the most frequently asked Passover questions. It was constantly updated on both Facebook and Twitter, often pre-empting the questions of the MK’s many, many followers.

Canadapassover.ca was designed for those who keep Passover and was spectacularly received, with greater numbers than ever visiting the site.   Many hundreds of Jews used the Mechiras Chometz services and sold their Chometz to a gentile through the MK.

The Kashering services held in the MK Parking lot is always well attended. This year was no exception. Under the strict supervision of Rabbi’s, hundreds of Montrealers were able to cook and come to their Seder tables with clean, freshly kashered utensils, pots, pans, silverware and anything else that could be kashered. This is truly a community service done by a community-minded organization.

The MK dedicates hours for phone calls to ‘Doctor-on-Site’ and ‘Pharmacist-on-Site’. Consistently knowledgeable doctors and pharmacists have, over the years, fielded hundreds of questions. This year, the MK was truly ‘out there’ with their #ezpassover concept, creating an energizing Passover awareness. The result?  Many, many more people called with questions, truly grateful at receiving on the spot answers.

#ezpassover’s focus was helping its valued consumers from one end of the country to the other and from many continents. It is the privilege of the MK to be able to bring Passover into thousands of homes, making the lives of communities globally less stressful. Next year in Jerusalem!