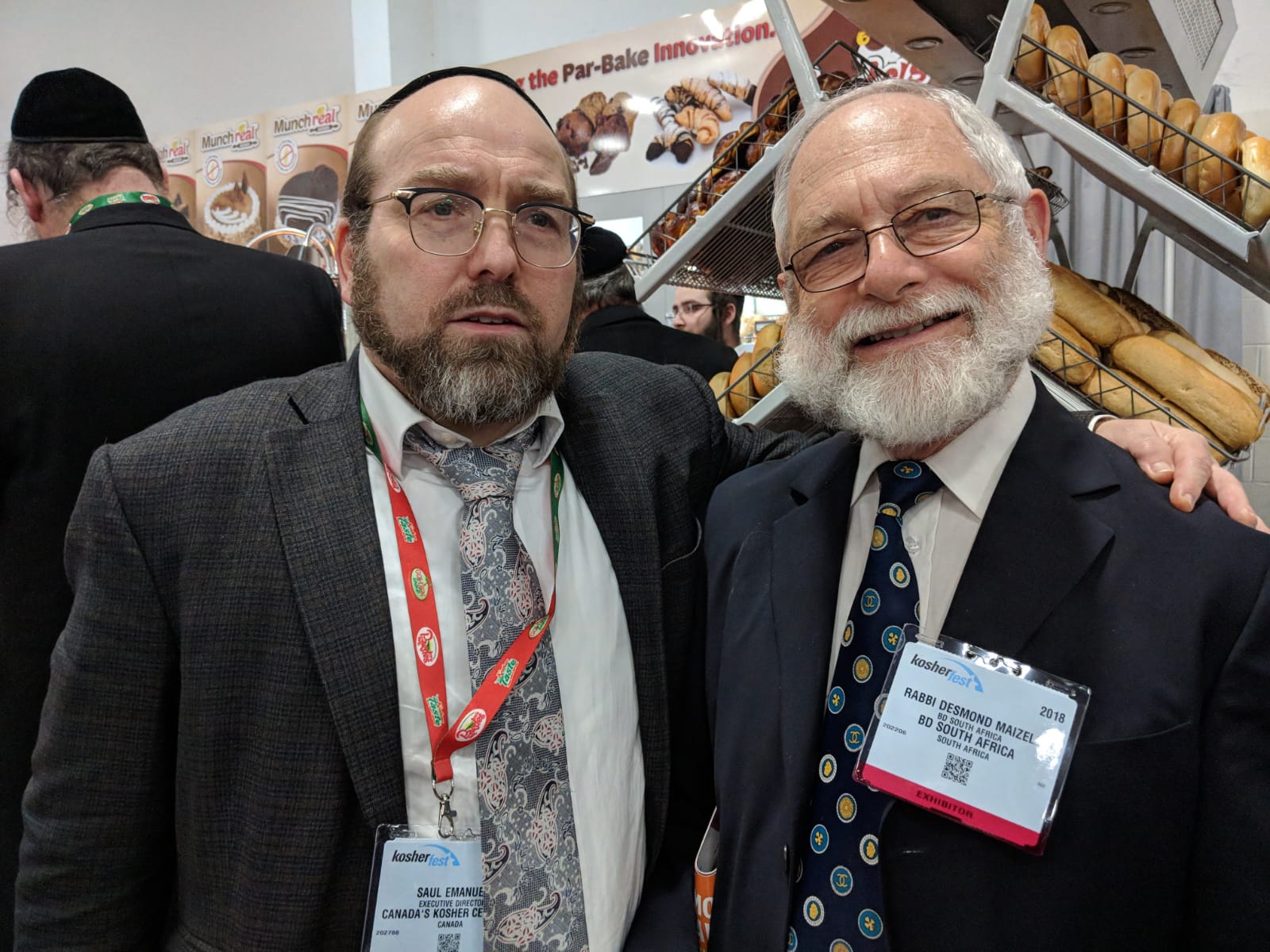 On Erev Shabbos, Parshas VaEira, the world woke up to shocking news, the passing of a huge icon in the world of Kashrus, Rabbi Desmond Maizels, of Capetown, South Africa.  Having had the opportunity of working in conjunction with Rabbi Maizels for over 35 years, the shock is still setting in and is deeply felt in so many ways.

Rabbi Maizels was a one-man show who was relied upon by Kashrus organizations throughout the world.  He could be called upon at any time, any place, to serve as a Rabbi, a Mohel, a Shochet, a friend or anything else that was required of him.  His warmth and pleasant personality endeared him to every single human being with whom he came into contact.  One often hears the expression that certain people only keep Kosher at home.  Rabbi Maizels personified this in a different way, by keeping Kosher in his entirety, Kosher in his heart and Kosher in the way in which he conducted his daily life. He was a walking Kiddush Hashem. The lay workers at facilities bearing his Kosher supervision, respected him immensely and honored his every word.

Crossing the entire globe, Rabbi Maizels visited hundreds of facilities on an annual basis, ensuring that their Kashrus level was up to par.  He set high standards for Kashrus and if a company was not able to manufacture something to his values, he would not certify them as Kosher.

An example comes to mind, that of Kashering wine companies which is complex.  At the very onset, Rabbi Maizels would explain the procedure of Koshering the non-Kosher wine tanks by Milui vErui (filling them to the top with water and emptying them every 24 hours, and repeating three times). Only if the company agreed, would he certify them as Kosher.  He explained this procedure using his gentle approach, thus the workers admired and revered him.  The thorough way of dealing with all issues at a company was remarkable.  He achieved universal acclaim as one of the most reliable people in Kashrus.

Another trait we can learn from Rabbi Maizels, is that he wasn’t there to flaunt his own standards.  If another Kashrus organization wanted him to carry out a Chumra on their behalf, he would make every effort to do so by respecting the needs of that organization.

Each minute of every hour of his daily life was lived in a Kosher way. He was extremely careful not to spend communal funds when traveling or carrying out any work.  He would look for the cheapest flights, cheapest modes of transport and would say, this is “holy” money and one must treat it as such. Yashrus in Kashrus, honesty and integrity in Kashrus, was his motto, and he was a living example of this.

The Cape Town community is now bereft of its leader in Kashrus, who knew every file of every company that he dealt with off by heart, including the manufacturing protocols, number of products and whether these were produced for Pesach or all year round.

There is much to learn from Rabbi Desmond Maizels, whether by example of his work ethics, his standards of Kashrus, his respect of the kashrus agency in which he served, or through his pleasant manner in which he dealt with people.  Rabbi Maizels had a great sense of humor and always made the other person feel good by taking the time to listen to him.

May the Mishpacha be comforted amongst those of Zion and Yerushalayim and may they know no further sorrow.