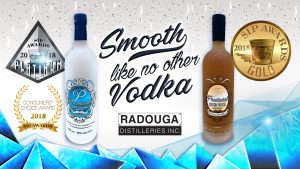 When Radouga Distilleries launched in 2014, it began with the mission of bringing quality liquor production to Saskatoon, Saskatchewan, which until then, had rarely seen high-quality liquor across the province. With care and attention to detail at the company, using all Canadian recipes and small-batch boutique quality, Radouga Distilleries has set itself upon the competition by securing its spot as a provider of high-quality, professional liquor across the country.

Radouga Distilleries proudly boasts several options in their lineup of liquors, including their flagship product, Provincial Vodka, recently earning itself a medal at the annual New York World Wine and Spirits Competition in 2016. With accreditation and publicity at its side, Radouga Distilleries continues to expand across Canada with new offerings, including Provincial Vodka Spiced, caramel-and-butterscotch infused alternative to its regular Provincial Vodka offering, making two unparalleled drinking experiences. Radouga’s lineup also includes Paul’s Blueberry Pie Liqueur, and Paul’s Apple Pie Liqueur, using the base of their flagship Provincial Vodka infused with blueberry and apple juice, creating a rich flavor unlike anything else on the market. Using unique ideas and creative flavors, Radouga Distilleries continues to set itself as a unique provider for consumers looking for inventive new flavoring and drinking alternatives.

Radouga Distilleries is constantly striving to deliver new flavors and new offerings, expanding to new markets all across Canada. What began as a modest ambition to bring high-quality liquor options to local Saskatoon has grown to a company-wide passion to innovate and try new ambitious ideas. With an ever-growing goal to provide their consumers with the best, Radouga Distilleries continues to expand into new markets, new flavors, and new ideas to invigorate the liquor industry like never before.

With an ever-expanding goal across the country, Radouga Distilleries hopes to change your liquor consumption experience and can create flavors and products to keep its many fans returning for more.