A Kosher Truck? Why the MK logo on a tanker 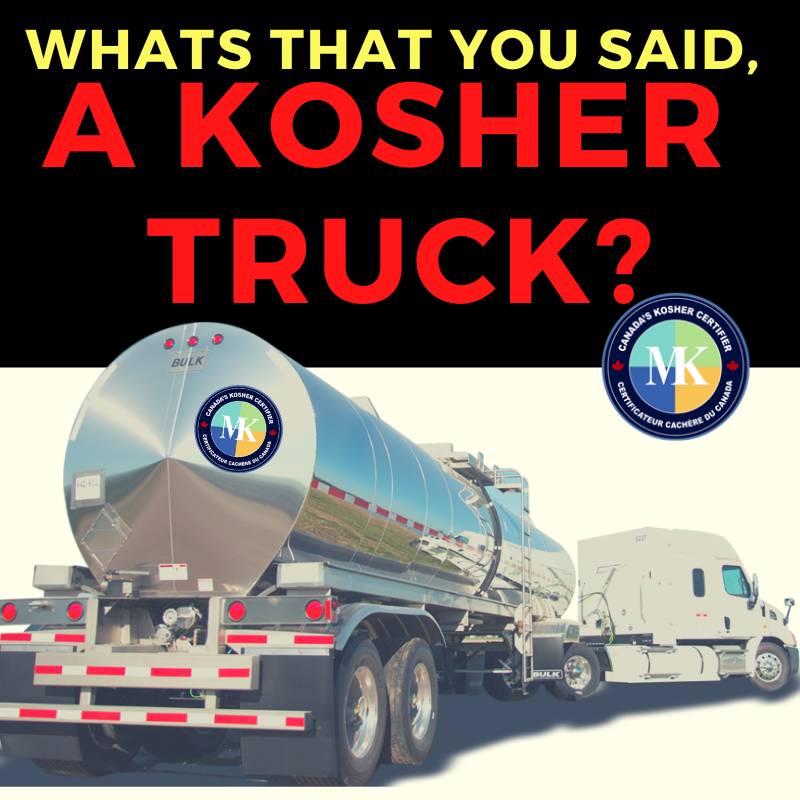 I was driving along the 87-North when one of my kids shouted, “hey look, a kosher truck!”
You couldn’t miss it. A massive blue stamp on the back of the truck with the MK symbol. “You think maybe the truck is edible?” mused my daughter.
I chuckled. “Nah, it’s probably filled with Michael Kors jackets or something.”
We passed the truck, which clearly wasn’t carrying clothing – it was a tanker. The rest of the way home I wondered why a truck would need a kosher symbol.
The best possible kosher alert of all time
When I got home, I called the MK. “Um, this may be the strangest call you’ve ever received, but I think someone out there believes your symbol is like a company registration sign or something, cuz I saw it on the back of a tanker.”
I was kind of hoping to see a KOSHER ALERT displayed in Synagogues across Canada informing everyone that a Kosher symbol had erroneously been placed on a vehicle.
Imagine my surprise when the receptionist informed me that the MK certifies trucks.
But after mulling it over, I realized that it made sense for trucks to need certification. After all, a tanker could have been carrying Treif on a previous trip. But I had to know exactly how trucks get certified, so I sat down with MK Directors Rabbi Saul Emanuel and Rabbi Peretz Jaffe to get the full picture.
How to make a truck Treif 101
Tankers don’t just carry juice and gasoline. They also bring ingredients needed in bulk to process kosher foods you put on your table (and in your stomach). Stuff like honey and vinegar.
Not all liquids that travel by tanker are kosher. Glycerin, a widely used sweetener and humectant (product that keeps food moist). The word glycerin actually derives from the Greek word for sweet (glykys). Glycerin is usually made of non-kosher animal fats. The same can be said of certain oils.
A truck that carries a non-kosher load, even if the liquid is cold, for more than 24 hours becomes Treif. Some liquids, such as molasses, are transported hot in order to speed up the loading and unloading process.
Why the big symbol?
Canada is 9.985 kilometres in size, and a truck may carry vinegar from Nova Scotia to British Columbia or from Toronto to Florida. Transportation companies need a way to carry kosher liquids without consumers worrying about the kosher status of the liquid.
To this end, the MK pioneered the concept of the kosher truck. “We were the innovators of putting kosher stickers on trucks,” Rabbi Jaffe told me. “No one else did it until we did it.”
Aside from the practical aspect of the kosher trucks, the symbol serves as a deterrent. “If the truck has a kosher symbol on it, the driver thinks twice and won’t go to a non-kosher place where people will see him,” explained Rabbi Emanuel.
A trucking company that wants to kosherize some tankers will notify the MK, who will provide a list of trusted companies who give trucks the “kosher wash.”
Giving trucks the kosher wash
“We know specific companies that we allow the truck to go to for kosherization because we know that the procedures and temperatures they can reach is according to what Jewish law requires,” said Rabbi Emanuel. “So we have recommended koshering facilities where a truck would need to go.”
To kosherize a truck, it is thoroughly cleaned, inspected by a Mashgiach (kashrut supervisor), the truck is filled with water and brought to a boil using a live high pressure steam hose. It takes about hours for the water to boil. When the water has boiled, the Mashgiach returns to ensure that it reached the right temperature.
Once the kosher wash is concluded, the water is emptied from the tanker, which can now carry kosher liquids. The truck’s number is noted and added to the list of kosher trucks. An MK symbol is stamped onto the tanker.
Watching the logs
To ensure trucks aren’t carrying non-kosher liquids, a copy of each truck’s log is sent to the MK on a weekly basis. The log details the liquids carried and locations where the truck has gone.
A typical log might have kosher oil going to Florida, and orange juice carried back to Canada. Then kosher vinegar sent to New York City, etc.
In addition, a Mashgiach is sent out once a month to check the logs of every truck. He can randomly check trucks as well.
Certain trucks need to be watched a little more carefully. Some trucks only carry dairy, others may need to be kosherized for Passover.
So next time you are driving on the highway and spot a kosher symbol on a tanker, give the driver a thumbs up, because what he is carrying will probably end up in your stomach.
Share

Passover in Your Pocket – Passover Guide 2020

By: Joannie Tansky Sarah is a quiet, elegant and deeply spiritual woman, evident from her demeanor and soft, kind eyes. She is also someone who can relate to pain. Born in Montreal of Sephardic heritage, she is the eldest of three sisters. When Sarah was fifteen and a half her mother passed away, after battling…